Broadway or bust: Could this musical in Utah be the next ‘Dear Evan Hansen’?

After seven years of writing and rewriting, Lin-Manuel Miranda got “Hamilton” to Broadway. Will the new musical “Fly More Than You Fall” — starring Lexi Walker in its premiere production at UVU — find the same success? 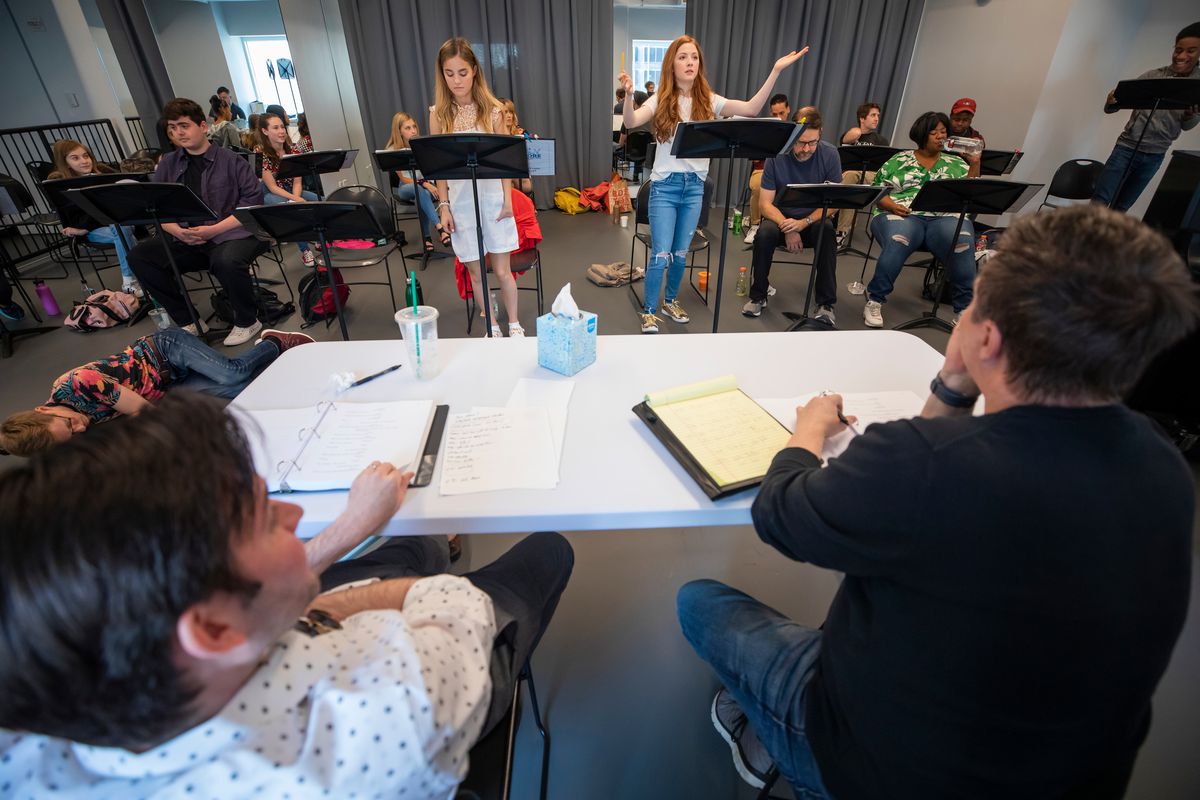 SALT LAKE CITY — The road to Broadway doesn’t have a fast speed limit.

Just ask “Hamilton” creator Lin-Manuel Miranda. It took him one day to craft a couplet about George Washington.

“Hamilton’s slow-going, my friends, but I promise you it will be worth it. It’s hard converting whole swaths of history into a hot 16 bars,” Miranda tweeted in 2009.

Six years later, “Hamilton” debuted on Broadway and went on to win 11 Tony Awards, a Grammy and a Pulitzer Prize. “Hamilton” produced $165 million in revenue over the last season and continues its open-ended run in the Richard Rodgers Theatre — one of 41 theaters on Broadway.

Now, a new musical called “Fly More Than You Fall” that premiered Thursday at Utah Valley University hopes to join the ranks on Broadway and find a home in one of those coveted theaters. But space is tight — only 27 of the 41 theaters are currently housing productions, according to the Broadway League’s official website.

“A lot of theaters are renovating right now, which caused a bit of a bottleneck a few years ago that we’re still trying to all survive,” Eric Holmes, writer of “Fly More Than You Fall,” told the Deseret News.

Like Miranda, Holmes and director Jeff Whiting (“Bullets Over Broadway,” “Big Fish”) have been in the business long enough to know it’s not an easy journey. But they also know getting there isn’t impossible.

“Generally musicals take about seven years to make it to Broadway,” Whiting told the Deseret News. “Only one show in my career took only one year, but you never know. We’re certainly on track, and we’re thrilled about the traction that we have already.”

So why does the New York-based creative team behind “Fly More Than You Fall” — an original musical about a 14-year-old girl coping with the tragic news of her mother’s cancer diagnosis — believe the musical stands a chance on Broadway?

“I don’t know a single other story (on Broadway) that’s dealt with a child losing a parent, or for that matter, grief,” Holmes said. “It’s a topic most musicals shy away from. … Something that should be talked about more.”

Broadway producers and investors are coming to Utah to find out.

‘We needed this show’

Holmes and “Fly More Than You Fall” composer Nat Zegree both lost a parent to cancer at an early age. For Holmes, it was his mother. Zegree lost his father. The two have poured their grief and pain into this emotionally dense musical.

“We created the show because we needed the show. Nat and I had been wanting to write about our experiences of losing our parents at a very young age. … It’s hard to find the right vehicle to tell that story,” Holmes said. “Anyone who’s lost someone knows that with grief, there’s no time limit. It’s not three months and you’re out. You’re grieving the loss of a parent or any loved one for the rest of your life.”

The creative team hopes “Fly More Than You Fall” can join Broadway musicals like “Next to Normal” and “Dear Evan Hansen” in helping to change a common perception that musical theater is “a kind of silly, easy-swallow pill.”

“‘Next to Normal’ dealt with a very serious mental illness. I got very excited as a writer because I realized that someone had opened a door that we could go deeper and darker,” Holmes said. “That was something I’d always wanted to do, as much as I love ‘Guys and Dolls,’ and as much as I love the classic Broadway musical.”

If you’ve ever squinted at a screen, struggled to see clearly at night, suffered from headaches, or dealt with blurry vision from near or far, there’s a good chance you could have astigmatism. A…

“Next to Normal” — a musical about a mother struggling with bipolar disorder and how handling that disorder affects her family — made its Broadway debut in 2009, going on to win three Tony Awards and a Pulitzer Prize for expanding “the scope of subject matter for musicals.”

Six years later, “Dear Evan Hansen” tackled bullying, social anxiety and suicide under the Broadway lights. It went on to win six Tony Awards — including one for best musical. The commercial success of these stories shows that amid juggernauts like “The Phantom of the Opera,” ‘The Lion King,” ‘’Frozen” and “Wicked,” there is a place on Broadway for harder-hitting topics.

“Fly More Than You Fall” has been in the works for three years now and had a successful 29-hour reading with Broadway producers this past summer in New York City.

“I’ve never heard so much excitement, buzz around a new musical, and I’ve been lucky to work on lots of new musicals.” — Jeff Whiting

“I’ve never heard so much excitement, buzz around a new musical, and I’ve been lucky to work on lots of new musicals,” Whiting said of the reading in New York. “So there’s a good buzz about it, which could turn into a quicker timeline.”

Part of the musical’s strength, according to the creative team, is how fantasy and reality are blended together. In “Fly More Than You Fall,” the teenaged Malia (played at UVU by Utah singer/actress Lexi Walker), works through her grief by writing a story about a young bird with broken wings. Onstage, that story — at times lighthearted — weaves in and out of Malia’s real-life struggles.

“Despite the fact that it’s one of the more serious topics you could ever put into a plot, we wanted to show people that there is levity to be found in that,” Zegree said. “I’ve always believed that the greatest comedians in the world are the ones who experienced the greatest tragedy and draw from that. And so it was very important to us, and I think we succeeded in finding the perfect balance.”

When Broadway producers and investors attend “Fly More Than You Fall” during its two-week run at UVU, one of the many things they’ll be considering is which of the Broadway theaters would make the best home.

“The greatest challenge is finding … the finances,” Whiting said. “And then once the money’s raised, probably the bigger challenge is finding a theater that’s the perfect fit for your show that is available. The St. James is like the most wanted theater. … Everybody wants to get into that theater, but ‘Frozen’s’ there, and that’s not going anywhere.”

It takes a bumpy, detour-ridden road to reach that kind of exposure — a path filled with workshops, rewrites and smaller-scale productions.

Adaptations and retellings like “Frozen” are the safe route to Broadway. Original stories are the risky route. But “Fly More Than You Fall” is capitalizing on something ongoing Broadway musicals like “Mean Girls” and “Dear Evan Hansen” have found success in doing: using a teenage demographic to touch on universal issues.

“If a producer sees it and loves it, they’re sold on it,” Whiting said. “As long as they feel attached to it and they know there’s an audience for it, you can sell tickets to that.”

Having the right ingredients isn’t always enough to catapult the story to Broadway, though. It’s a real estate game, waiting for a theater to open up or for a show to unexpectedly close. Last season, 72 Broadway shows worked their way into the comparatively smaller number of available theaters, according to The New York Times, and while the Broadway scene is more diverse than ever, big titles like “Aladdin” and “Harry Potter and the Cursed Child” still aren’t going to budge. But even with limited space on Broadway, the team behind “Fly More Than You Fall” is as optimistic as the musical’s title.

“We incredibly support and revel in the success of every artist doing fantastic work on Broadway,” Zegree said. “We simply hope to join them.” 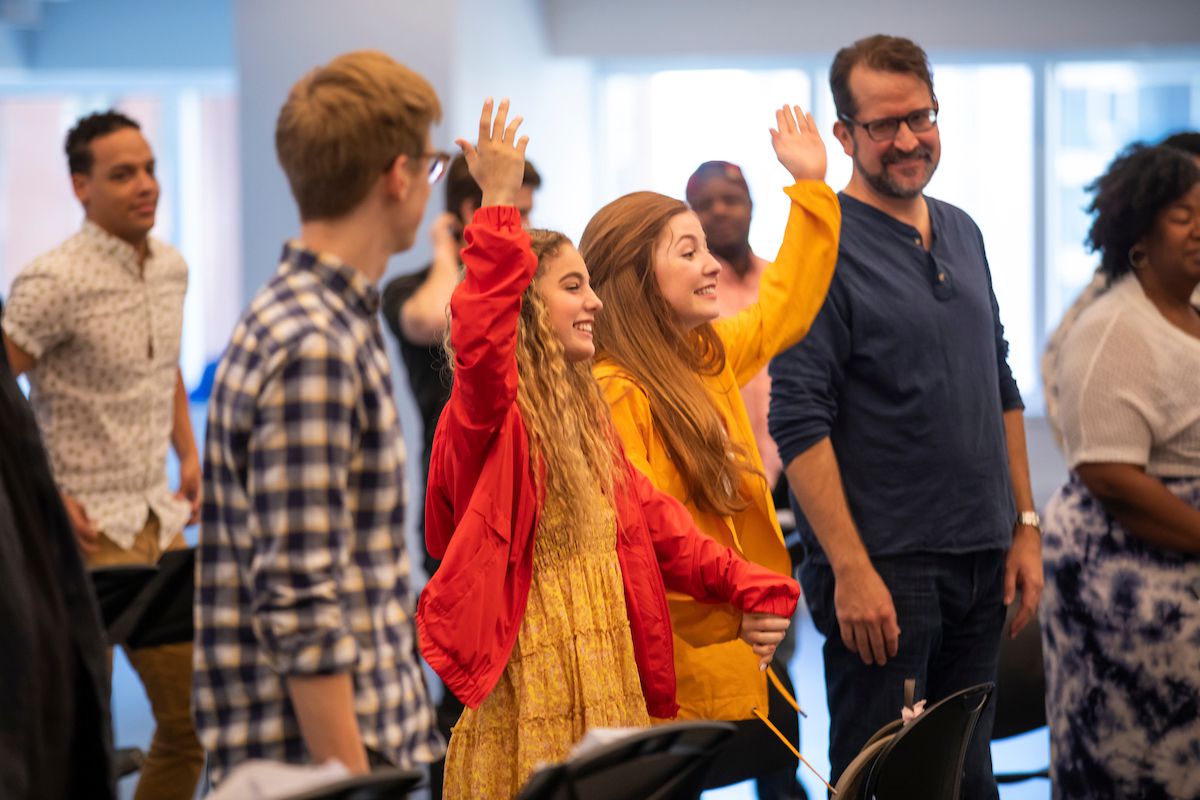 UVU student Lexi Walker and Tuacahn High School for the Performing Arts junior Autumn Best, along with “Fly More Than You Fall” writer Eric Holmes, composer Nat Zegree and director Jeff Whiting, during the 29-hour reading of “Fly More Than You Fall” for investors and others at Open Jar Studios in New York City on Wednesday, June 12, 2019. August Miller, UVU Marketing

So why was Utah chosen as a testing ground for “Fly More Than You Fall?”

“Any chance you get to put the show up and see how it works in front of an audience is a valuable one, but the fact that it was Utah, for me, was a really great blessing … because I know that the audiences here would give us the kind of feedback that we need,” he added.

Indeed, Utah is one of the top states in the country for arts participation, ranking first in the nation in a 2015 National Endowment for the Arts poll for adults who attend live music, theater and dance — beating out both New York and California with 51% of adults attending such events.

“For us to be able to have the very first eyes on this brand new show be a Utah audience is going to help us enormously in terms of knowing what works and what we need to continue to tweak in order to shape it for the Broadway theater,” Whiting said. “It’s a great opportunity for the Utah audience to come and get a sneak peek before it hits Broadway.”